Cryptocurrencies sold off on Monday as stocks suffered their steepest decline in weeks. Signs of stress in China’s credit markets over the weekend contributed to bearish sentiment across global markets and triggered a rise in the CBOE Volatility Index (VIX) to levels last seen in May.

Roughly $1 billion in BTC liquidations occurred Monday morning, and more than 7,000 BTC left exchanges during the same period, according to data from CryptoQuant.

“Some have attributed the sudden dip to the ongoing Evergrande situation in China, which has already caused turmoil in traditional markets,” Jonas Luethy, a trader at the U.K.-based digital asset broker GlobalBlock, wrote in email to CoinDesk, referring to the cash-strapped property company in China.

“Analysts have suggested a choppy week is ahead, with a potential bitcoin pullback to as low as $41,000, although a key support remains at $44,000,” Luethy wrote.

Some analysts expect equities to perform poorly, as well. “We think the mid-cycle transition will end with the rolling correction finally hitting the S&P 500,” Morgan Stanley research analysts wrote in a Monday report. The firm raised the possibility of a 10%-20% correction in the S&P 500 Index driven by deteriorating economic growth and valuation contraction.

Bitcoin miners have been in accumulation mode over the past six months, according to blockchain data compiled by Glassnode. The amount of unspent miner supply has climbed by roughly 13,000 BTC since January, which followed a period of miner distribution at the end of last year.

“After a small spend of around 1,360 BTC in late August, it appears miner balances are increasing once again,” Glassnode wrote in a Telegram post.

Further, “at a market cap of $900B, bitcoin is worth 29.7x more than its total input cost,” Glassnode wrote, which means miners have an incentive to accumulate BTC in hopes of a profit.

For now, crypto mining-related stocks are under pressure as the crypto sell-off deepens. Riot Blockchain (NASDAQ: RIOT) is down about 19% over the past month, while Marathon Digital (NASDAQ: MARA) is down 4%, compared with a 9% decline in BTC over the same period. 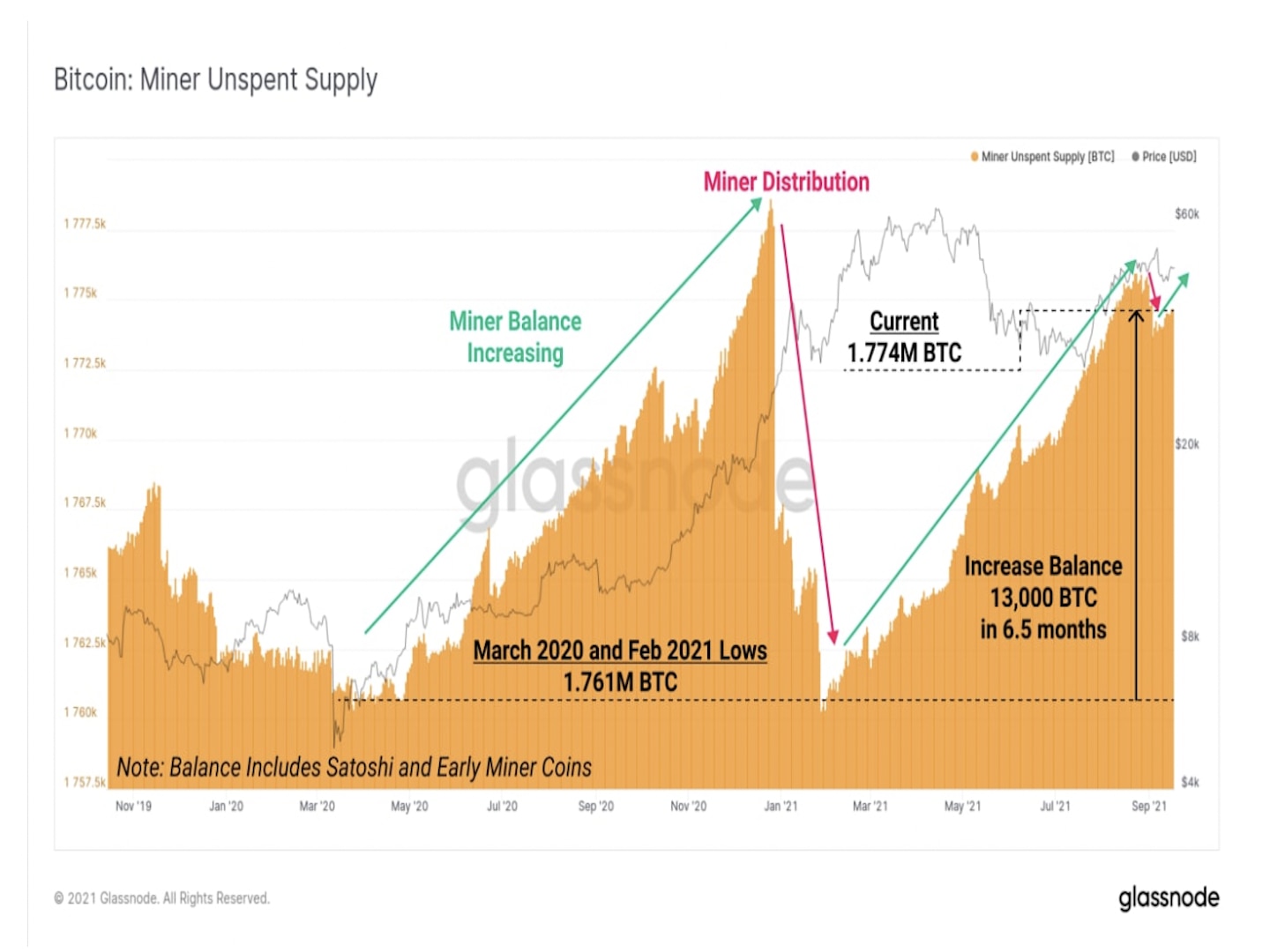 “This improved sentiment could be a seasonal phenomenon, but we are not seeing a commensurate rise in volumes in investment products,” CoinShares wrote in a report published Monday. “This suggests that some investors are taking advantage of recent price weaknesses and the continued rise in alt-coin popularity.”

Despite inflows of $15 million over the last week, bitcoin, the world’s largest cryptocurrency by market value, has suffered the most from negative investor sentiment with inflows in only three of the last 16 weeks. 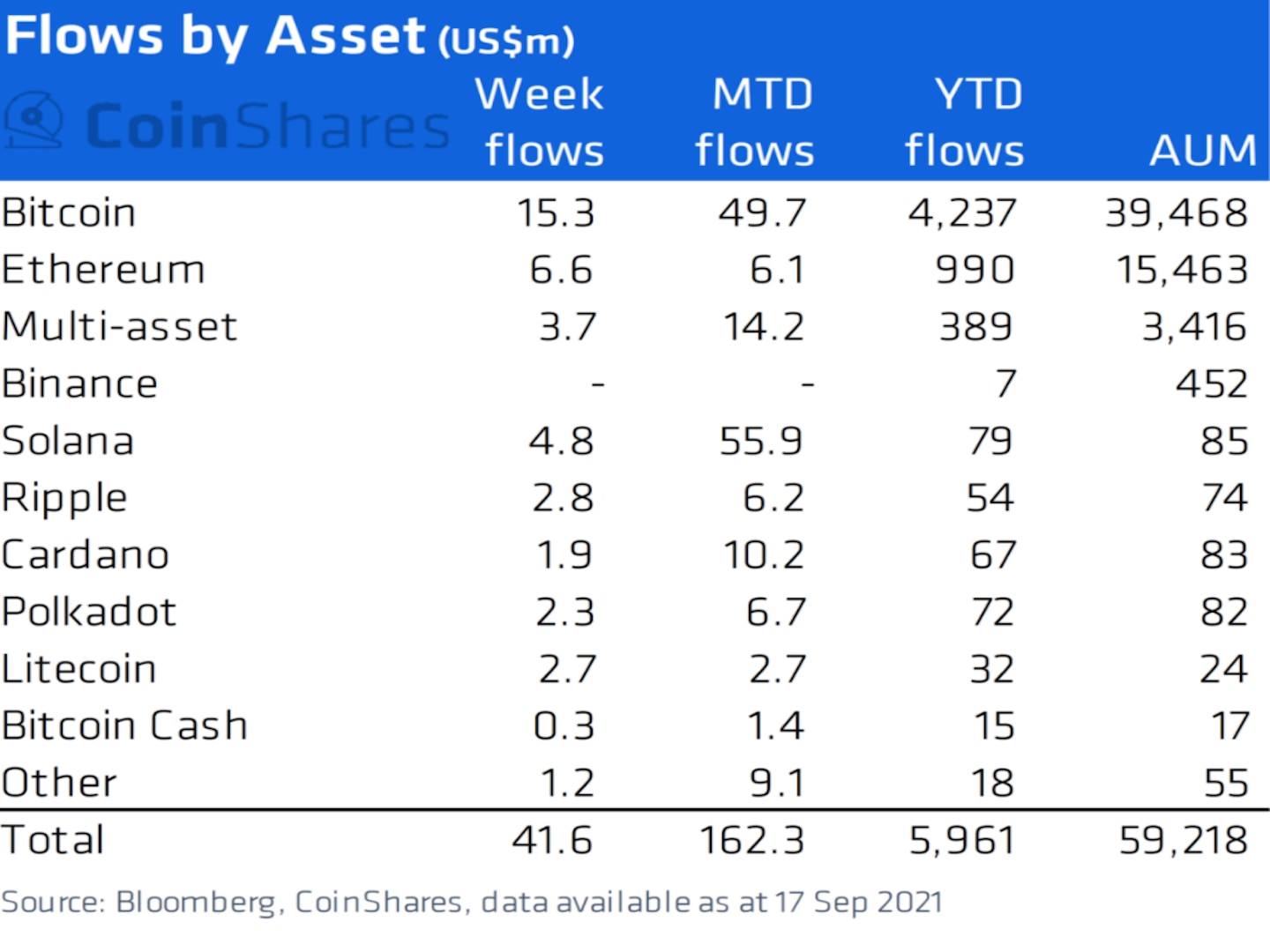 Decentralized finance (DeFi) tokens had an impressive run since July, although bullish sentiment is starting to wane. Some analysts point to the nearly 15% decline in Solana’s SOL token over the past week as a sign of profit-taking in the DeFi market.

The chart below shows DeFi tokens are fairly correlated with each other, but the correlation with ETH is relatively weak. “ETH had its monster rally earlier this year while DeFi lagged, which explains this phenomenon,” Delphi Digital, a crypto research firm, wrote in a blog post.

DeFi tends to move in and out of favor, albeit with short-term opportunities for investors to diversify their core BTC and ETH holdings given the weak correlations.

But over the long term, “the ultimate point still remains true: Most investors were better off holding ETH and BTC rather than playing the passive allocation game in DeFi,” Delphi Digital wrote. 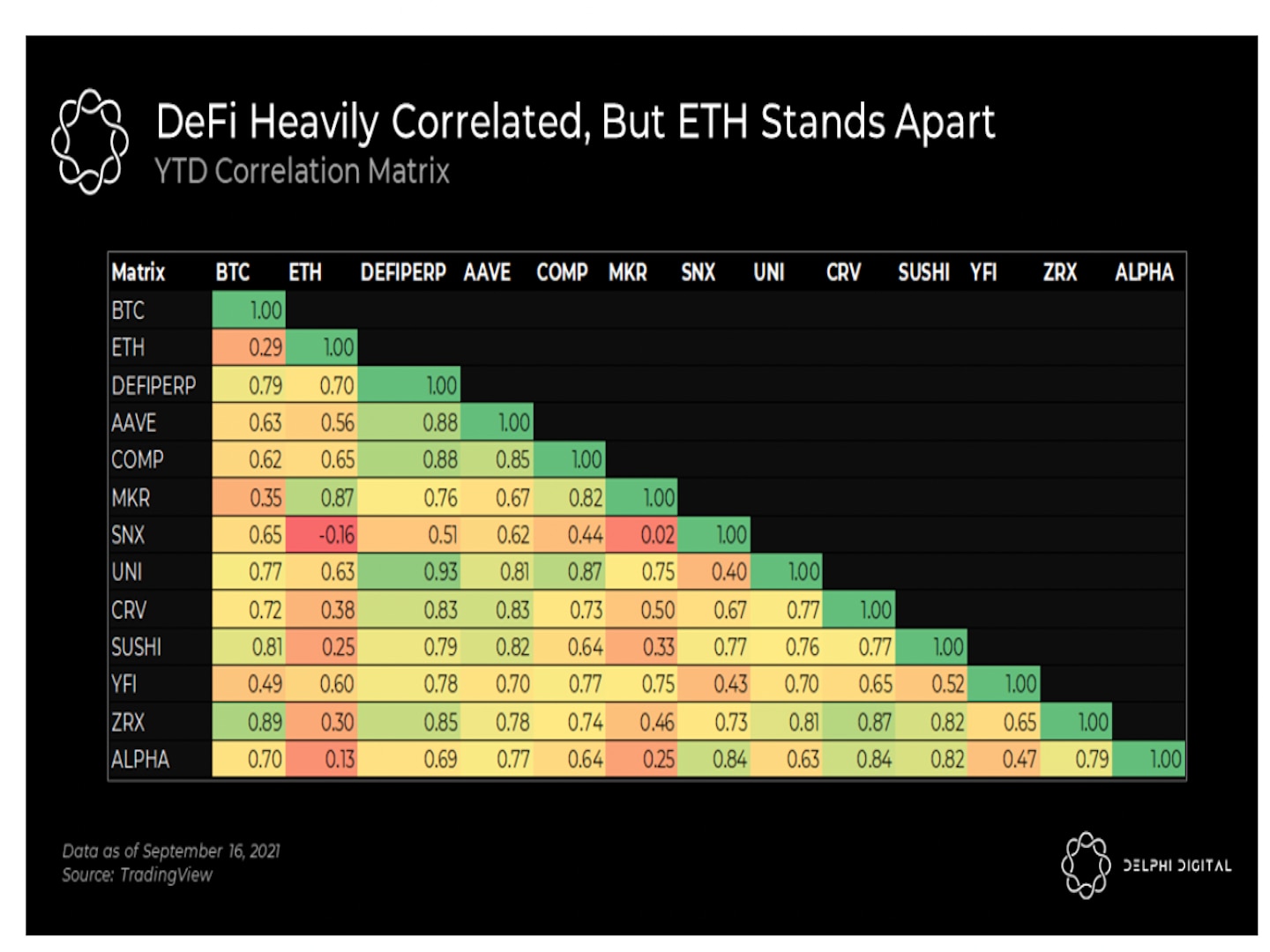 All digital assets in the CoinDesk 20 ended the day lower.

The Issuance Model in Ethereum

Stablecoins is a good way to keep and save money or not?

Stephen Curry Gets Into the Crypto Game, Becomes FTX Ambassador