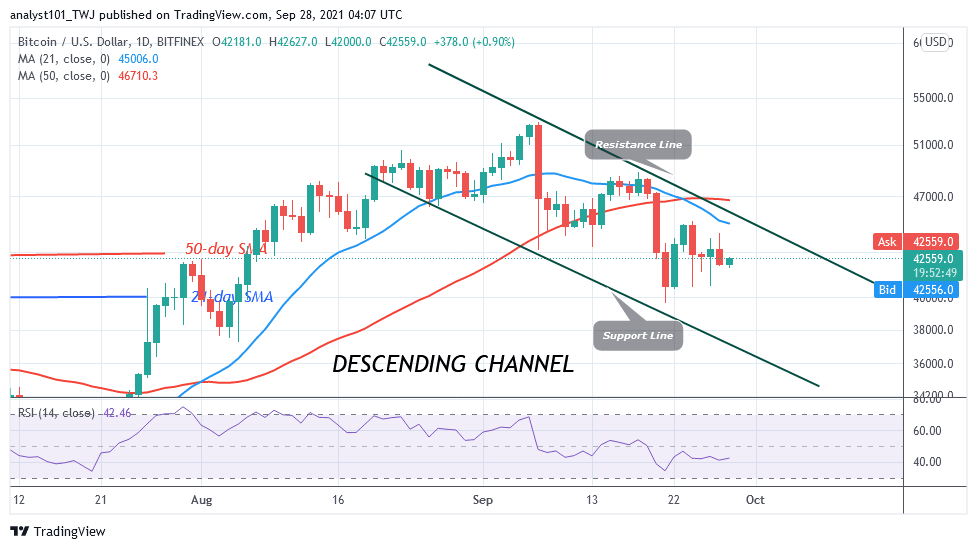 Bitcoin Fluctuates between $40K and $45K as Bitcoin holds above $40K

Today, Bitcoin has resumed marginal trading above the $42,000 support. The crypto has been trading below the moving averages which makes it possible for the bears to have the upper hand. For instance, if Bitcoin falls to the $40,000 support and the bears break below the psychological price level. The market will decline to the low of $37,000 low. All the price indicators are pointing to the previous low if the selling pressure resumes. However, buyers are buying time as the crypto holds above $40,000 support and makes a range-bound move. The Relative Strength Index period 14 is at level 42. It indicates that Bitcoin is in the downtrend zone and capable of falling on the downsides.

Bitcoin Price May Rise Ten Times But I Will Not Buy It, JP Morgan CEO

Jamie Dimon is the CEO and the banking tycoon of JP Morgan. He has been an infamous detractor of Bitcoin since 2017. Also, he has been a social critic of Bitcoin since 2017. Despite his criticism, Jamie Dimon agreed that the leading digital asset will increase by ten times in a matter of five years. Since 2017, the CEO has called Bitcoin (BTC) a fraud. He made particular reference to criminals who evade capture from authorities by operating their financial transactions in BTC rather than U.S. dollars. In an interview with Times of India, the CEO was asked whether Bitcoin or other cryptocurrency assets should be banned or regulated, Dimon responded: “I don’t care about Bitcoin. I think people waste too much time and breath on it. But it is going to be regulated. […] And that will constrain it to some extent. But whether it eliminates it, I have no idea and I don’t personally care. I am not a buyer of Bitcoin. That does not mean it can’t go 10 times in price in the next five years.” Nevertheless, JPMorgan has shown interest in the development and implementation of crypto and blockchain initiatives for the past years.

Meanwhile, Bitcoin has continued to fluctuate in a confined range as Bitcoin holds above $40K. Yesterday, buyers could not sustain the bullish momentum above the $44,000 high. Consequentially, BTC’s price has been falling to the lower price range at $40,000. If the current support is breached, the downtrend will resume. On the other hand, if the support holds, the BTC price will resume a fresh uptrend.