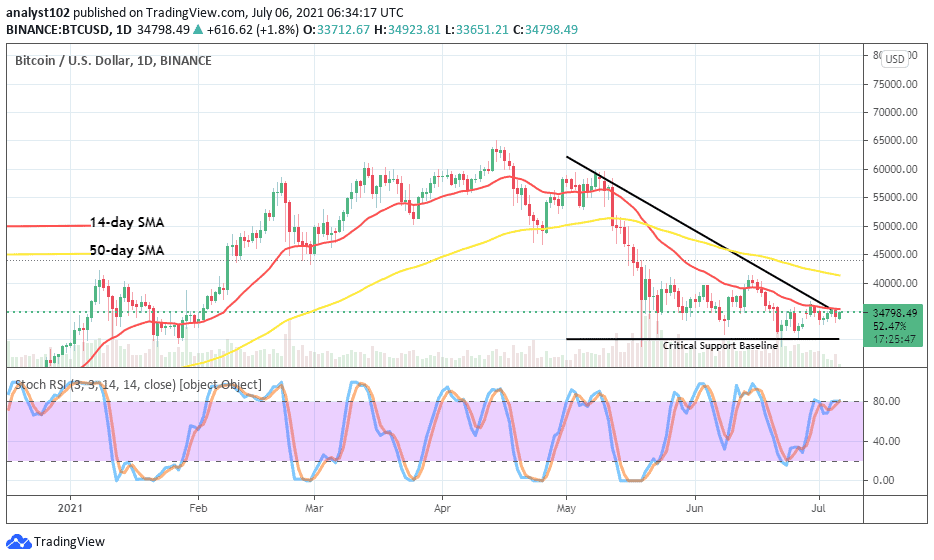 Bitcoin Price Prediction – July 5
The BTC/USD market operation holds close to the value of $35,000. The crypto’s value trades around the level of $34,743, putting up with a percentage increase rate of about 1.64.

BTC/USD Market
Key Levels:
Resistance levels: $37,500, $42,500, $47,500
Support levels: $30,000, $27,500, $25,000BTC/USD – Daily Chart
It now majorly showcases on the BTC/USD daily chart that the crypto’s operation holds close to the level of $35,000 with the formation of a smaller bullish candlestick, trying to push northward more underneath the smaller SMA. The bearish trend-line drew downward to pose a resistant mark on the buy signal side of the 14-day SMA trend-line underneath the 50-day SMA indicator. The critical support baseline remains validly drawn at $30,000. The Stochastic Oscillators are swinging around the value of $35,000 to affirm that the point is vital in determining the real next direction of the market.

It may take a while that the BTC/USD market operation holds close further to $35,000 until the subsequent sessions. A fearful breakout of the point is needed so that bulls will be able to build energy on. Trading psychology in regards to this crypto-economy; supports that some of the downward reversal moves made underneath the level earlier mentioned will most likely pave ways for continual buying entries. Like wisely, investors could as well play along.

On the downside, in a familiar style similar trading of the upside, a fake pull-up against the line of $35,000 is needed by bears to get back a decent sell around the point. But, traders of that trading opinion needed to be wary of their positions below the point repeatedly stated in this analysis. Thought, the staying of the Stochastic Oscillators around the range of 80 closely into the overbought region suggests that a downward force may feature if they consolidate any longer around it.

It appears on the BTC/USD 4-hour chart that operation holds close to the bearish trend-line drew downward over the SMAs. The 50-day SMA indicator has conjoined from below by the 14-day SMA trend-line between the levels of $36,000 and $32,000. The medium-term run of the BTC/USD market operation has some weeks’ sessions been featuring around those trading points. The Stochastic Oscillators have moved northbound from the oversold region, slantingly pointing toward the upside. That portends a slight weakness in the crypto’s capacity to push upward more as of writing.